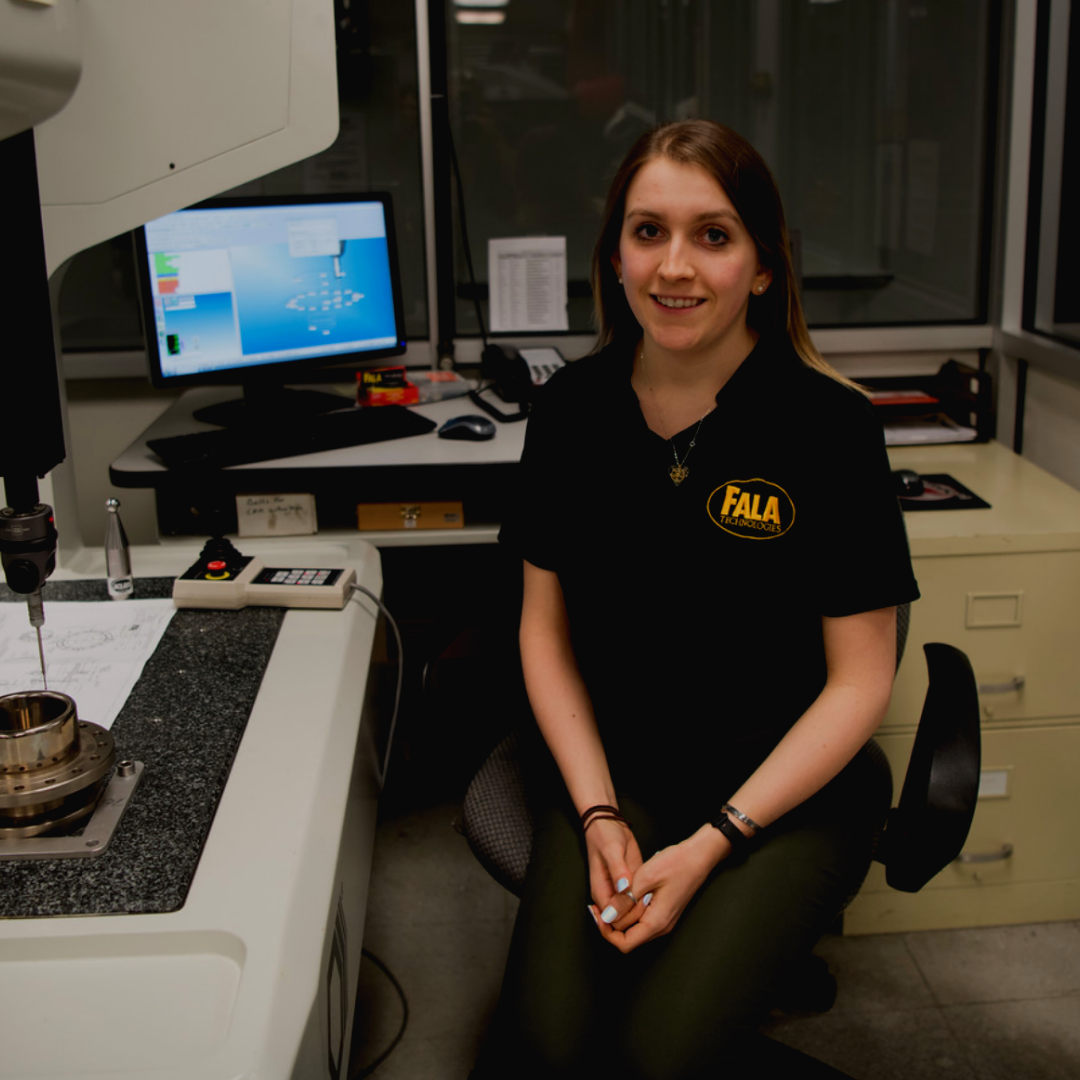 Our Q&A with Kayla Marchant of Fala Technologies.

It’s no secret that the advanced manufacturing sector in the Hudson Valley, like everywhere else, is facing enormous pressure to try to fill jobs and simultaneously cultivate a pipeline of future talent.

One recent graduate from SUNY New Paltz College of Mechanical Engineering, Kayla Marchant of Rhinebeck, N.Y., offered a few clues and tips as to how encouraging design-led thinking can help engage and retain talent in middle school, college and on the job.

In 2017 Kayla landed a job as a quality engineer working as a project manufacturer at Fala Technologies, a great entry-level position for someone graduating from the college’s recently implemented Mechanical Engineering degree program.

Kayla shared with us some of the factors that shaped her ultimate decision to pursue engineering.

One surprising factor was her emphasis on the benefits of exposure to design courses and design-led thinking and the impact it had on her overall growth as an engineering student. We also found her thoughts on reaching kids through Instagram interesting.

Our conversation with her is a reminder that schools (supported by manufacturers) must prepare (and early!) the next generation of STEM innovators by offering students exposure to creative ways of making things.

A STEAM trained workforce of the future needs to be able to solve vector problems, create Mohr’s circles, do a section analysis of trusses while understanding finite element analysis and fatigue analysis, use a scanning electron microscope, and, of course, more.

But early exposure to design and design tools may set students on the course of study and subsequent career path the manufacturing sector hopes they will choose. 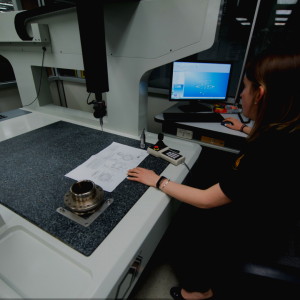 This interview has been edited and condensed.

Tell us a little about your background

I grew up in Rhinebeck and went to Red Hook’s High School. From there, I went to Dutchess Community College, and then I went to SUNY New Paltz.

When I originally started college at Dutchess I was studying math and education, I wanted to teach high school math, and, basically, the curriculum for that is a lot of physics and calculus. The same thing that an engineer would start out with.

I was already taking those classes, and I ended up liking the engineering kind of stuff. In particular, I liked the study of physics and realized it was more interesting to me than teaching.

In high school, was there anything in your experience that fostered an interest in the maths and sciences?

My father’s background: he’s also a mechanical engineer. And then my mother has a degree in nursing.

They’re both science-and-math oriented. So I feel like it’s just how I grew up. At the same time, Red Hook High School had a really great program for math and sciences.

All their teachers were great. They kept you involved. I enjoyed them and that is why I wanted to be a math teacher, I was inspired by them.

Initially, when I went to Dutchess Community College, I focused on math and science and then transferred, three years ago now.

What made you decide to go to a community college?

I wanted to save money, and I knew wasn’t really ready. I didn’t know where I wanted to go and, honestly, I wasn’t ready, to leave home.

SUNY New Paltz was one of the schools I was looking at as an education major. I was also looking at SUNY Cortland and SUNY Oneonta.

I didn’t really feel like I was ready to live on my own, though.

So, I finished at Dutchess and then I went to New Paltz for the last two years of my education and entered the Mechanical Engineering program.

That was the first class of their new engineering program. What made you decide?

Actually, when I got accepted there, I set up an interview with a professor. I didn’t know at the time that he would ultimately become my advisor.

I kind of just talked to him and he told me about the program and explained what set their mechanical engineering program apart.

How was New Paltz’s approach to Mechanical Engineering different?

I think it’s because it’s an art school. The school has a tradition and reputation as having that whole, liberal art-school focus on design.

I found out they do a lot of work with SolidWorks. I had already studied AutoCAD and wanted to improve my SolidWorks skills

As a part of the degree program, they have three semesters of design courses that are pretty much set up in a lab structure.

The classes were held once a week, about three hours long, and, basically, each course was set up so that you were designing from the start.

The classes Kayla describes are currently listed as:

Can you describe the classes?

In the first semester, we had to design a toy; it was going to be 3D-printed to be used for the daycare on campus. They did it to give us a real-life problem to solve for and so the course kind of walked us through producing something for a customer.

Only in this case, the customer was a four or five-year-old child.

We went and visited the kids at the campus daycare, and we were like, “Hey, what do you guys want?” And they told us they played with race cars a lot.

So, we redesigned a new track and a ramp system for them so they could race their cars, not competitively, because the teachers didn’t want it to be competitive, obviously, for four and five-year-olds. They loved it!

For the second semester course, we reverse-engineered a drive shaft specifically for an Audi.

We had to do a lot of research on driveshafts in general and we studied the materials that were involved in designing a drive shaft and also the housings, you know, all the components that go into creating a drive shaft.

So we reverse-engineered the boot of the driveshaft and I thought that was a lot of fun, mainly because I really like SolidWorks. We used it and I got to play around with it a lot.

What was your take away from the Design Thinking approach you were introduced to?

Having worked towards something for a whole semester and then seeing everything come together was really satisfying.

I feel like that to me was one of the reasons why I switched to engineering from education because to me, you could spend a whole semester trying to get a student to understand this one concept of math, and they just still won’t get it.

Do you use SolidWorks at Fala?

Yes. We typically don’t do 3D-printing here just because we have the CNC machines to make things here. We mostly prototype for other companies.

What would you advise high school students to learn?

I learned AutoCAD. It is a little easier for the beginner, but SolidWorks, if you know what you’re doing, allows you to do much more custom work.

From your perspective, what would be a way that would have raised your awareness about the opportunity at Fala?

I’d say it’s LinkedIn. I feel like most people even in high school now are looking at LinkedIn. Yeah.

I think it is interesting that a lot of business majors at New Paltz, they take a course where they’re required to build a resume. And they have to set up a LinkedIn profile.

So you think if a company were to really have a presence and were also to advertise on Linkedin, they might reach that student?

How about a high school kid who doesn’t know what he/she wants to be.  “I like gaming, I like high school math. I like Harry Potter.” How do you reach him or her?

That’s what I think. Because I mean, to get the high school student, you can get them to follow hashtags. That’s one step in its own right. You know, hashtags for #cncprinting 3dprinting; #solidworks; #stratasys.

For example, if you 3D-printed a Spiderman or something, right? And hashtagged that. Maybe like #spiderman #3dprinting,  something a high school student might see, visual things based on their interests.

Not necessarily just: #3D-printing, but something geared to their interests. I feel like right now, going around to toy stores and seeing what is picked up off the shelves would be a way to see what toys are popular based on a movie or a TV-show character, things like that.

Then you could build your Instagram feed around that, maybe doing a 3D-printed toy based on a popular character and showing the process.

I think there are a lot of ways you can communicate to that audience and videos you could show in Instagram Stories, like a time-lapse of 3D printed characters that were prototyped, maybe using some Disney music as the soundtrack.

So, use Instagram to showcase prototyping and 3D printing of culturally popular icons of the moment?

Yeah, exactly! I do, I think that is a way that you would capture their interest!