by Barbara Lee
in Nanotechnology
Comments

Pundits claim we are in the midst of what has been dubbed The Fourth Industrial Revolution. It’s a hot topic among academics, business leaders, and politicians.

How did we get here?

Watch this 6-minute YouTube video about the rate of civilization’s growth, and if you don’t fall asleep in the first five minutes, you’ll arrive at an acceleration on the timeline.

Seriously, though, at the beginning of civilization, as the video shows, technological advances such as agriculturally based communities, control of fire, metalworking, the wheel, and other innovations appear gradually.

By the 18th and 19th centuries, however, civilization catapults forward in giant leaps as energy in the form of steam and then electricity is harnessed.

The Industrial Revolution originated in 18th century England and came to 19th century America,  formalizing along the way, and changing the means of labor and production from small guilds to machine-driven, mass-production.

It was a transition that continued to be leveraged well into the early 20th century in American factories.

Factories such as those located in cities like Newburgh, N.Y., where Thomas Edison installed a power station making Newburgh one of the nation’s first electrified cities.

Car and jet travel brought greater mobility to large populations, and by the 1960s chip-powered computers made information processing lightning quick. The rise of the internet distributed that information ubiquitously and also quickly.

In our present day, we continue to witness an incredible acceleration in technological progress.

In an attempt to articulate and define this progress, the phrase “The Fourth Industrial Revolution,” was coined by academician and scholar Klaus Schwab. He’s also the founder of the World Economic Forum.

Our current phase of progress (per his book by the same name) must be seen, he maintains, as a revolution that meets at the cross-section of the physical, digital and biological spheres of science and engineering.

Schwab notes that progress is occurring at an incredible rate, and it is actually changing the physical world around us, wherein the things we engage with operate on a level not experienced before.

It’s a world more connected to a digital space involving software, hardware, and integrating with us, eventually, some say, bodily!

Biological innovation is here, says Schwab, and will continue to develop. We can see that happening at the molecular level: scientists and engineers are hacking the digital code of our very DNA.

Schwab also argues that in advanced manufacturing, designer materials and processes and delivery systems are being created at the nano level.

This is most fully realized in the manufacturing subspecialty known as nanotechnology.  The field is extending across multiple sectors, from energy to-food-to medicine, and to communications.

In 1985 Bob Abels groundbreaking animation “Sexy Robot” was ahead of its time in many ways, including anticipating nanotechnology, machine learning, and the Internet of things (IoT).

So, what exactly is nanotechnology?

Nanotechnology uses science and engineering to create and support applications in all areas of human activity. In scientific terms, when we say something is nano, we mean it is very small, tinier than tiny.

How small is small?

The size of one nanometer is one-billionth of a meter,  roughly 100,000 times smaller than the width of a human hair.

When we manufacture at this scale it is called nanotechnology. It is a fast-moving area of science.

Nano is everywhere in nature 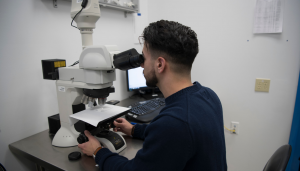 Nanostructures also occur in plants and animals. For example, nanostructures in a moth’s eye are anti-reflective ensuring predators can’t see them.

In the case of moth-eye based technology, Scientists recognized the genius and potential of the naturally occurring nanostructures and recreated them by creating a film that coats cellphone screens to cut down the glare.

“Moth-eye technology is far from the first invention inspired by nature. Velcro was inspired by burs from the burdock plant that stuck to a dog’s fur after a hunt,” according to NPR, when reporting on the innovation.

Charles Vest, brilliant mechanical engineer- and president of MIT for 14 years, from 1990 until December 2004, led The Academy, as well as Government, to an understanding of nanotechnology and its implications.

He boiled it down in a way even a non-engineering person can understand in a speech he gave in May 2001- at MIT:

We now know the dictionary of life.

“We have essentially completed sequencing the human genome. We now know the dictionary of life. We have a breathtaking new understanding of how humans have evolved and how we fit into the total plethora of living things. The insights are staggering.

“We suddenly have the extensions of our eyes and hands that allow us to do nano-scale science and technology. We can create new materials and devices that are structured one atom or molecule at a time. This may lead to materials with remarkable new properties, to hugely greater strength-to-weight ratios, to low-power/high-performance computers, and to new medical diagnostic and treatment strategies.”

Like Professor Schwab, only years earlier, Professor Vest maintained that nanotechnology would create a new Industrial Revolution for the 21st century.

Some real-world examples of nanotechnology

Nanofiltration is a process that removes impurities from water.

Cancer and other diseases can employ biosensors to detect biomarkers of disease. Innovations include Nanotechnology-based drug delivery such as a Thin-film drug delivery – Wikipedia

Smartphones deploy nanotechnology in what can be considered embedded-  “hives. The CPU, camera, touch screen and GPS all use nanotech applications. The size of an individual transistor in a modern smartphone CPU is 14 nm, about 5,000 times smaller than the radius of a human hair.

T-SEC partners with many manufacturers in the Hudson Valley, such as Ceres Technologies of Saugerties. Stay tuned for future blog posts where we will bring you updates about our partners, their projects, the jobs they have created, and the people working with them.