Unshattered is gaining recognition because of its success in helping addicted women overcome opioid addiction.

Kelly Lyndgaard the social entrepreneur responsible for founding Unshattered describes the nonprofit as being a social enterprise that offers opportunity employment.

What is a social enterprise?

Unshattered is a social enterprise, which is to say it is a charity that is helping to meet and solve a social problem by using a market-driven approach.

Social enterprises maintain that it is possible to make a profit while doing good for the world by creating jobs and also improving the lives of the community the respective social enterprise is trying to assist.

Unshattered employs women who are winning the difficult fight against opioid addition. Not only does this help them during their recovery process, but because Unshattered makes pocketbooks and other accessories from donated fabrics, the women who work at Unshattered learn valuable seamstress skills, as well as production and management skills.

Bags on display at Unshattered at the retail store in Hopewell Junction, N.Y. Bags may also be purchased online.

T-SEC recently visited Unshattered at their new location in Hopewell Junction for a glimpse into how the business was faring in their new space.

They moved there after having first been located at The Accelerator in a SMARTT Pod with equipment funded by T-SEC. T-SEC and The Accelerator partner to provide resources to various types of startups including social enterprises like Unshattered.

The new 2,000-square-foot space was once a childcare center at the Valley Christian Church, a Hoving Home partner. The Hoving Home rebuilds women’s lives that have been shattered by addiction.

We encountered a small but very busy studio divided into two parts: the front of the shop, a retail space and the back of the shop, where production is done.

As we entered the retail shop we could see a bustle of activity happening towards the back of the building: women engrossed in their work seated at sewing machines or standing at a table, large swaths of fabric laid out flat before them, preparing to cut.

In the front of the shop Kelly Lyndgaard the energetic woman who is the driving force behind Unshattered in short order greeted a customer, answered our questions, and occasionally dashed to the back to powwow about a design. 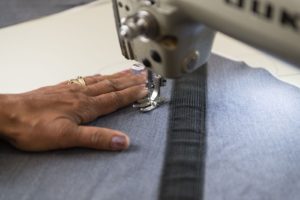 Kelly has a big bright smile further enhanced by the stunning and vividly colored bags and accessories displayed about the shop.

Large bolts of cloth are stacked in displays about the room. You make the connection between the finished products you are admiring as you look at the bolts of fabric.

The women in the back busily sewing reinforce the notion, “oh, right, they’re making the product here!”

It’s as effective as an open kitchen in a bustling bistro in creating drama and interest.

“I’ll tell you the story about Emily.  She has a vacation day today.” begins Kelly, sharing the story of Unshattered’s start.

“Is she one of the sewers?” we asked.

“She actually is our director of operations.  It was her story that I heard that just completely changed my life.  I was sitting about 50 feet that direction.” Says Kelly.

“So, yeah, Emily shared her story. She was an eight-year-old and her mom was ill with lupus, the parents were divorced.  And so at eight years old, she’s taking care of herself, her mom, and her brother, she’s grocery shopping, mowing the lawn, whatever.

“ And she had a friend with a 15-year-old brother who thought it would be funny to get an eight-year-old high.  Fast forward ten years, she’s a homeless IV drug user.  And for the first time in my life, I thought, “There’s no other outcome to that story.  She was an eight-year-old.”

“And I got off of my high horse of thinking maybe people should just stop sticking a needle in their arm, get a job, and be more responsible.  And realized that addiction is not just irresponsibility.

“And had I faced the same trauma and the same choices…,“ Kelly’s voice trails off as she reflects on the idea that but for a different set of circumstances anyone can fall prey to the scourge of addiction.

“So, I got involved with the Walter Hoving Home, which is down in Garrison, where these gals have all gone through a 12-month recovery program.  And I just fell in love with this hard work that they’re doing to get well and work hard and be responsible.” She continued.

The women working at Unshattered are recovering addicts, most addicted to opioids.

One of the recovering addicts at Unshattered’s workshop

How did Unshattered become a social enterprise?

Kelly was determined to raise $10,000 for the Hoving Home. She had repurposed a bag from a coat worn by her grandfather, and so this spurred her to think she could create more bags if she could have the Hoving Home women help her.

They began to work together and together they sold bags to church members.

They also began to sell on Etsy, the popular online shop for vintage, handmade, custom and unique gifts.

Laughing, Kelly observes “The first bags were not good, but we had to start somewhere.”

Consulting with T-SEC and The Accelerator

Kelly gives as much of the ownership of Unshattered as she can to the women who work at Unshattered. Now, several years old the business has matured, and Kelly lets the women bear most of the responsibility.

The women do all the shipping, they manage the floor, they create the design, they own purchasing parts.

But in the beginning when she began to see that a business was being built she quickly knew if it was going to succeed under the framework of a social enterprise, one that meets a market need, she would have to have a space in which to test the viability of the operation and from which to expand.

Accelerator SMARTT POD s, are co-working spaces that are fitted up with business equipment, connectivity, etc., and customized, when needed, for qualifying startups or social enterprise startups looking to incubate, refine and scale the business.

The two had known each other at IBM, where they both held executive positions, both Kelly and Vincent are physicists by training and background.

Cozzolino created space for Unshattered and turned to his colleague and friend Carl Meyer, President/CEO of T-SEC, to confer. 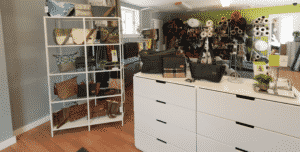 A Need for Process Improvement

“When Vinnie asked us to get involved, we both realized we needed to look at how Unshattered was operating,” Meyer explained.

“We knew that Unshattered was getting tremendous support online on Etsy, and getting great donations of fabric from West Point and theater production companies, but that they would need to sell more bags in order to grow and hire more women.

“Our strategy was to observe the Unshattered team at work. We did and quickly realized that one of their biggest problems was,  for one thing, much of their work was being done by hand and for another, one person end to end would make the whole thing!” he said.

Meyer and Cozzolino work together frequently.  T-SEC (The Strategic Economic Consortium) often serves as a funding partner to the Accelerator’s incubator model.

T-SEC is dedicated to providing entrepreneurs and regional manufacturers with support, resources, and equipment to help them grow.

It also fulfills its mission of support for Economic Development Agencies, by providing equipment or capital funding, and has worked extensively with The Accelerator.

“Vinnie and I are both engineers, and we also work with a consultant, Bill Cox, a tremendously talented engineer who retired from a long career at IBM.

“We quickly realized a Process Improvement strategy was in order and did an assessment,” Meyer said.

“In order for Unshattered to grow, we knew that they would need an assembly line process with the women handling different tasks, for instance:

“And so forth. By using a combination of process improvement and a lot more equipment, which T-SEC provided, we were able to help Unshattered. We purchased probably eight machines, some of which were:

that are state of the art industrial machines offering different stitching types.

“In turn, this improved the quality, durability, and most importantly the number of bags that Unshattered were able to create at The Accelerator, New Windsor,” Meyer said.

The Accelerator and T-SEC bring together a lot of experience which they leverage on behalf of startup clients to improve efficiencies, making products better.

Carl Meyer: “We are a group of engineers who examine an entrepreneurial activity, take it and help improve the process with procedures and equipment. We’re problem solvers, that’s what we do!”

Well enough, apparently, that Unshattered, according to Lyndgaard, is now able to engage almost 20 women in the sewing program (some at a second studio at the Hoving Home).

“So far, for our employees, our relapse rate is zero,” Kelly said proudly.

In addition, Unshattered is enjoying widespread recognition, which includes being recognized by the White House in October 2018 for its pioneering work with the opioid addiction community.

The Trump Administration invited the Unshattered team to join them in January of 2018 for a visit and again in October when the historic bill HR 6, Support for Communities and Patients Act was signed into law.

Because of the historic, bi-partisan HR 6, Support for Communities and Patients Act bill, Unshattered will be included as one of the partners able to work throughout the country with other service partners in helping this community.