T-SEC > All  > Technology  > An Engineering Feat in the Hudson Valley

An Engineering Feat in the Hudson Valley

by Barbara Lee
in Technology
Comments

What’s a TBM named NORA doing in Newburgh you say?

Well, first of all, let’s explain: TBM stands for “Tunnel Boring Machine” and in our neck of the woods (the Hudson Valley), one heck of a beaut of a TBM is working underfoot.

Now, this engineering marvel has nothing to do with T-SEC per se, nor our partners, but it is happening in our Hudson Valley region where many of our partners are highly specialized, engineering-driven, advanced manufacturing firms.

Maybe some of them along the way had a hand in the project, maybe not.

No matter, for sheer size, scale and ambition, this endeavor, its impact on our region, and the level of skill a workforce must bring to this project (on every level and encompassing thousands of jobs) makes it noteworthy.

The TBM is working to address two identified large leaks of water emanating via the Delaware Aqueduct, the most problematic leak being in Newburgh (the other leak is west of Newburgh in Wawarsing, N.Y.).

According to a late 2018 press release from the New York Department of Environmental Protection, “tunneling for the Delaware Aqueduct Bypass Tunnel reached the halfway point this week as workers 600 feet underground continued to drive eastward toward the Hudson River.”

This amazing milestone reflects tremendous progress on a one billion dollar project which will secure New York City’s water supply by repairing the two aforementioned leaks in the Delaware Aqueduct.

(per Wikipedia: New York City’s water supply system is one of the most extensive municipal water systems in the world. This complex system relies on a combination of aqueducts, reservoirs, and tunnels to meet the daily needs of New York City’s more than eight million residents and its many visitors.) 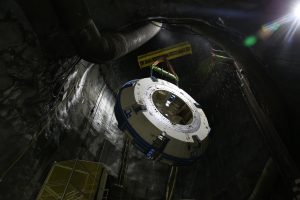 This project is the largest repair project in the 176-year history of New York City’s water supply system and it’s being done on the world’s longest tunnel.

Key points about the project, per the DEP:

Amazing footage of tunnel being bored under the Hudson River in Newburgh, N.Y. courtesy NYC DEP

According to The New York City Department of Environmental Protection (DEP) Barney’s role as a drafting technician who worked on the city’s first reservoir and aqueduct in the Catskill Mountains was the reason the TBM was named in her honor.

“Nora Stanton Blatch Barney was a talented engineer, architect and mathematician who paved the way for other women to employ their talents in these fields,” DEP Acting Commissioner Vincent Sapienza said in a press release. “While she worked on the city’s landmark water supply facilities in the Catskills, Nora also led the fight for women’s rights at the voting booth and in the workplace. Her achievements will provide considerable inspiration as we forge ahead with the largest repair in the history of New York City’s water supply.”

The TBM will fix two leaks in the 85-mile-long Delaware Aqueduct. The largest of the two leaks were identified located along Newburgh’s western banks of the Hudson River.

The press release further explained “ The TBM will be used to build a 14-foot diameter bypass tunnel alongside this section of the aqueduct. The 2.5-mile bypass will be constructed 600 feet below the Hudson River, between Newburgh and Wappinger. It will be connected to structurally sound portions of the existing Delaware Aqueduct to convey water around the leaking section. The leaking stretch will be plugged and permanently taken out of service.”

Key points about the TBM:

• The TBM is a massive and unique piece of equipment. The entire machine—including its cutter head, body and trailing gear—is more than 470 feet long and weighs 2.7 million pounds. Its cutter head is 21.6 feet in diameter.
• The TBM was built to withstand 30 bar of pressure—believed to be the most of any TBM ever manufactured. (That’s about 11 times the amount of pressure from a garden hose.) The machine needs to withstand that much pressure because workers encountered huge inflows of water under immense head pressure when the aqueduct was first built more than 70 years ago.
• The TBM is also equipped with dewatering equipment to pump 2,500 gallons per minute away from the tunnel as the machine drives it.
• NORA is equipped to install and grout the concrete lining of the tunnel (which was built into extremely porous limestone) and to convey pulverized rock to a system of railroad cars that will follow the TBM as it pushes forward.

As of the start of 2019, the NORA has successfully pushed to the halfway point in her 2.5-mile journey 600 feet below the Hudson River.