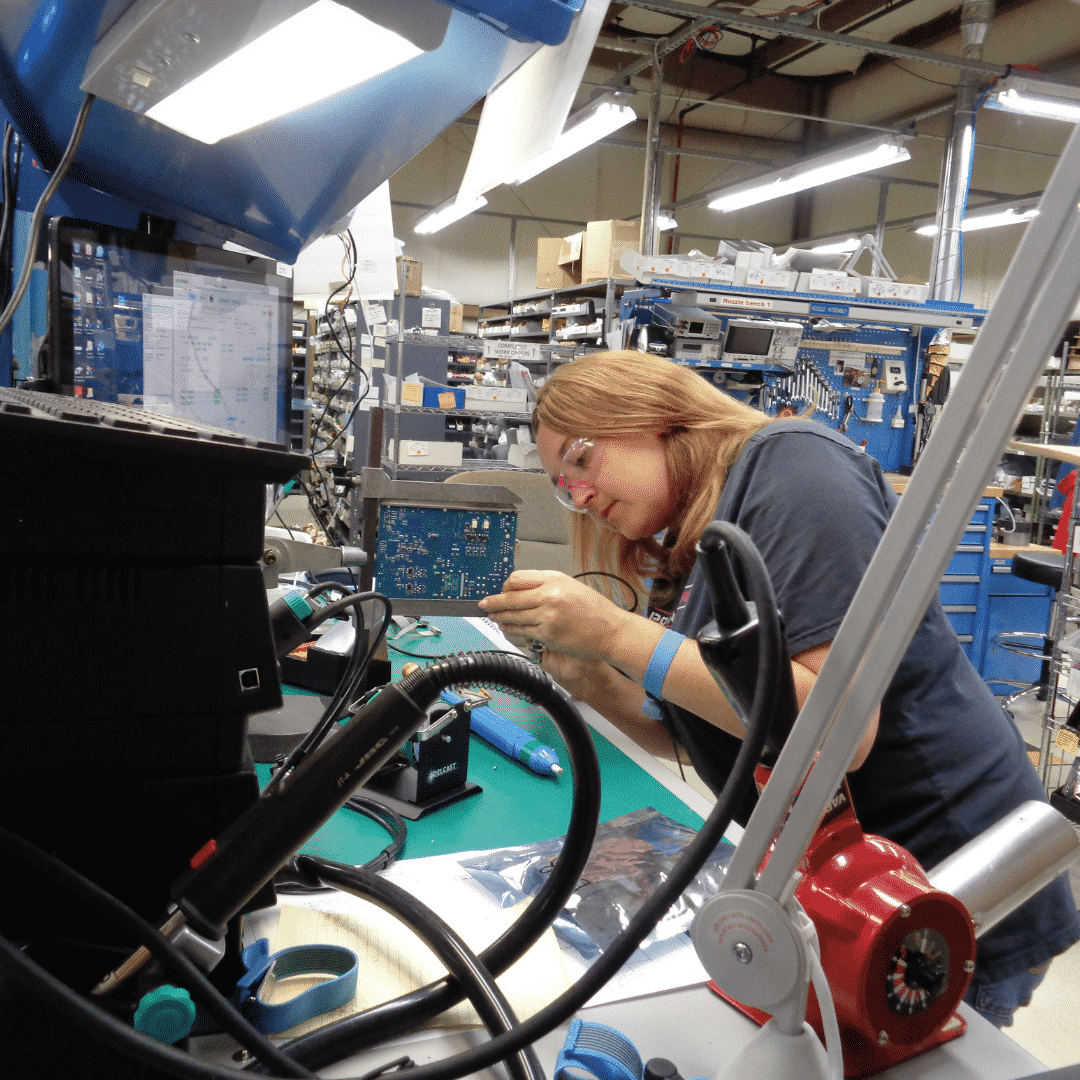 Finding skilled workers at the technician level and above has proven to be an increasingly difficult task for American Manufacturers nationwide.

In the Hudson Valley, the story is no different.

With an average age for skilled industrial employees falling somewhere between 45 and 55,  business owners, corporations and government officials are getting nervous about where the next batch of talent will come from.

New York State (as well as the federal government) realizes it is critical for businesses to identify and develop in-house talent.

Fortunately, for the Hudson Valley, there is a Newburgh based nonprofit dedicated to serving the area’s manufacturers and advancing their common goals, including developing a model apprenticeship program.

The Council of Industry: Offering multifaceted support for over 100 years 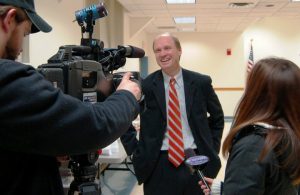 The Council of Industry President, Harold King interviewed by reporters

“Our mission is very simple at its core,” says President Harold King of the Newburgh-based  The Council of Industry. “We’re here to help our members be successful.

Of course, their needs have evolved and changed over the years. At the beginning of the progressive era, for example, when we had the beginning of a whole different regulatory climate, we did a lot of work helping members with compliance and being a voice for them with the public sector.”

The Council was founded in 1910 as the Mid-Hudson Industrial Association when the Hudson Valley hummed with heavy industry and very few products being manufactured today had even been imagined.

Since then, as core industries declined and others arose, the Council has remained mission-driven and nimble.

That mission? Whatever members need it to be.

“A lot of it is about leveraging numbers,” says King. “Our core activities — advocacy, workforce development, networking — what we’re doing is leveraging small companies into one bigger ‘side’, and trying to speak with one voice for 120 Hudson Valley members who have common interests with thousands more across the state.”

With a paid staff of four and a 28 member board of directors, the not-for-profit serves members from Westchester and Rockland counties in the south to Columbia and Greene in the north.

A twice-yearly magazine, HV Mfg, highlights who members are and what they do.

Research data are compiled to keep members in the know about the bigger picture, such as state and federal governmental regulatory issues.

Nurturing a workforce in the Hudson Valley

Right now, King says, manufacturers are in the novel position of needing fewer hands on deck than ever before while having a harder time than ever finding the right ones.

“There are fewer people working in manufacturing than ever before; the ones who are, are in more sophisticated roles with better compensation,” he says. “Mostly, people are designing and fixing the hydraulics, pneumatics, and other systems on the equipment that perform what most people think of as assembly-line jobs.

“At the same time, we have a huge number of people retiring — machinists, toolmakers, a lot of skilled employees — and we haven’t been replacing them. There are a lot of opportunities now, but there are going to be even more opening up over the next 8-10 years, especially as U.S. manufacturing is becoming more competitive again as wages rise overseas. So we’re really hoping we find a lot of people who are interested in learning skilled trades.“

King and his colleagues are doing a lot more than just hoping. The multi-faceted not-for-profit is seeking solutions on a number of fronts at once, from researching and serving as an information clearinghouse to lobbying government for policy changes and collaborating with educators to, hopefully, grow a fresh crop of hands-on, STEM-inclined individuals who’ll step up to the jobs that will need to be filled.

To spread the word about opportunities, The Council collaborates with SUNY Orange and fellow not-for-profit The Workforce Development Institute to maintain a website, GoMakeIt.org, targeted to young people and designed to dispel the outdated image of manufacturing as a grim greasy world full of “dimly lit factories and overworked assembly lines.”

As GoMakeIt.org explains, manufacturing operations need a wide range of skill sets and personality types — from dreamy creatives to hands-on techies, numbers crunchers and empathetic souls who can keep a team content — and reward them with a benchmark level of benefits that bring to mind those good solid jobs of yore: full medical, dental, disability and life insurance, retirement contributions, a week or two of paid vacation and tuition reimbursement.

Members are also encouraged to attend career fairs and spread the good word, but beyond these efforts, The Council promotes recruitment and training at every level.

In Newburgh, where The Council of Industry has been located for 20 years, P-TECH is a joint effort of Newburgh Free Academy, SUNY Orange, and IBM, which collaborated with the state to create P-TECH as part of its corporate responsibility agenda. 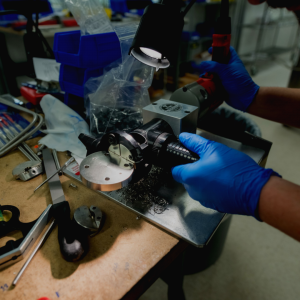 While P-TECH is designed to grow a fresh new crop of tomorrow’s advanced manufacturing pros, The Council of Industry offers training in everything from introductory-level hydraulics, and electronics to business communication and manufacturing leadership. Through The Council’s facilitation efforts, regional SUNY campuses can maintain a cornucopia of highly specialized course offerings that stand ready to be taught if the need arises.

“We bring economies of scale to the training process,” says Hansen. “A small organization with 12 people can get access to trainings, speakers and resources that would be out of reach otherwise.”

Working with the state, The Council has stepped up to offer skilled trades apprenticeships and training programs and helps companies meet state training requirements from OSHA and other regulators.

“Many of our members are second, even third and fourth-generation companies, which is pretty good,” says King modestly. “And yes, my colleagues from other places do get a little envious of the Hudson Valley.”

Since his early days of partnering with the Council, Frank Falatyn, President of Kingston based Fala Technologies and The Council of Industry Board member has taken on a key role in building workforce development programs throughout the region and the state. 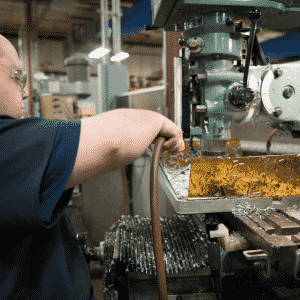 “We’ve been partnering with The Manufacturers Association of Central New York on workforce development for years, getting the state to work with us on apprenticeship programs, Falatyn says.”

“With the help of the New York State Department of Labor, we were able to launch the Manufacturers Intermediary Apprenticeship Program which allows associations like the Council of Industry to cut through the paperwork and make it easier for small manufacturing firms to implement a state-approved program.”

“Now we have a pathway for people: come in, start basic — although you’ll be making above minimum wage even there — and work your way up, show us what you can do. We’ve had four apprentices at FALA in the past two years.” 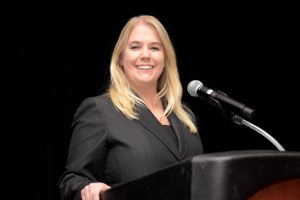 “Everyone is screaming for workforce, and nobody’s quite getting it right yet. We’re working with Youthbuild, which is mandated to create more than just construction jobs, so we’re working with their executives at the federal level to get some grant funding to put toward advanced manufacturing. I actually have a full-time employee I found through a Youthbuild apprenticeship.

“We excel at playing nicely in the sandbox,” says Hansen. “We have five different networks going. Collaboration is everything. And we need to get everybody on board — parents, students, teachers, counselors, social services folks, unemployed and underemployed people. Oftentimes, the person who hasn’t quite found a home anywhere else is an excellent candidate,” she says.

Elaine Burns is a new apprentice at Sono-Tek

Vince Whipple Production Manager at Sono-Tek, a Hudson Valley Advance Manufacturer and T-SEC partner, has a working apprentice, Elaine Burns, through the Council’s administration of the Apprenticeship Program.

On the ease of the program, Whipple had this to say:

“The paperwork is about ten minutes…they (Council) really have made it frictionless. And you know, there was a comment from the guy from New York State who said, you guys are the model that we’d like to use in the state!”

Whipple credits Johnnieanne Hansen and Serena Cascarano, Administrative Marketing Assistant at The Council, for the positive remarks from the Department of Labor because, he observed, they are doing such a superior job of organizing and running the program.

Said he, “Johnnieanne had a company contact me that was considering joining the apprentice program. They had like eight people on the call, and they’re hammering me. The recurring theme was ‘how much bureaucracy and how much administration is there going to be.’ They’re afraid of that.

“They all expect it’s going to be an administration hog. And it’s not. And I don’t know if that’s because we’re spoiled with Johnnieanne running it through The Council of Industry, but the way it’s structured and the way it’s organized, it’s not onerous!”

Johnnieanne offered, “We’re constantly knocking down barriers, building bridges and forming alliances.” The Manufacturers Intermediary Apprenticeship Program launched 18 months ago and there are 60 apprentices throughout the region. “We’re definitely starting to see an impact.”

As for the Council’s point of view on making it work: “On all sides of the equation there are multiple interrelated challenges,” says King. “It’s like a big game of Whack-a-Mole. The bottom line is, we are building a regional sector-based strategy to address workforce – it’s an exciting time to be a part of the manufacturing community.”