by Barbara Lee
in 3D Printing
Comments
Table Of Contents

To the layperson, the terminology can be confusing, but you should know that additive manufacturing and 3D printing are mostly the same things!

They both use CAD programs to create a prototype. This prototype is then printed using the material of choice on a 3D Printer.

This prototyping is used around the world, and even in our solar system as Nasa leverages 3D printing not only in its propulsion systems but in space where astronauts print out handy tools and other parts as needed.

With the 3D printing industry topping $7.3 billion and expected to triple that in the next five or years, what exactly is additive manufacturing?

Additive manufacturing and 3D printing both use a 3D printer to make parts.

However, the difference lies in how 3D printers are applied.

Are you a hobbyist making parts for a DIY project, or are you trying to produce products to use in a commercial industry?

HOW DO 3D Printers operate?

3D printers operate much like building a brick house. Layers of brick are laid on each other to build up the shape and size of the house.

Additive manufacturing uses a 3D printer to build up an object by layering plastic or other sometimes more exotic materials.

3D printers have been used to make chocolates, airplanes, and even to replicate human organs!

As with any other manufacturing technique, additive manufacturing and 3D printing has both benefits and drawbacks. Let’s dive in.

Have you ever designed a part that was not easily manufactured using traditional means?

3D modeling makes it so easy to design anything our minds have imagined, but when it comes to manufacturing, that’s typically another story.

Compromises on design to successfully manufacture have been required…Or at least that’s how it use to be.

Additive manufacturing has opened the flood gates to unlimited design flexibility allowing the designer to manufacture just about anything they design.

Because of the growing acceptance in the business world of iterative design principles which encourage:

entrepreneurs and innovators continuously test an idea until they get it right!

Who hasn’t wanted to custom design an idea they have dreamed up?

Maybe you envision a slick looking pair of retro sunglasses or a garden ornament?

Well, 3D printing opens the doors to creating custom designs almost at the push of a button, allowing designers to manufacture their ideas quite quickly.

As we mentioned the floodgate opened by with the popularity of interative design’s with its emphasis on rapid prototyping in a cyclic process of prototyping, testing, analyzing, and refining marries perfectly with the immense flexibility of the 3D print process.

A user has the freedom to modify the design file.

In the past, such changes might have meant remaking expensive tools just to achieve the desired design, other than uploading the redesign as a file and starting the print, no additional work is required.

In some ways, Additive Manufacturing is much like the easy-bake-oven of manufacturing.

3D printers have assumed some aspects of “plug and play” where advanced engineering knowledge is not needed.

Often, just the push of a button lets the computer program cut an object design into layers, these layers, in turn, are communicated to the 3D printer.

Because 3D Printing is an additive process, as opposed to machining which is typically a reductive process, there is very little excess material.

Consequently, costs per unit can be cheaper.

Traditional manufacturing’s subtractive processes require parts to be milled out of blocks of material larger than itself, creating high volumes of waste.

Traditional manufacturing gets expensive because of the labor required to develop the tools to realize product design.

Compound that with the fact the process can take days or weeks, and costs go up.

Additive manufacturing at the push of a button can create a new product in less than 24 hours this is often the fraction of the cost of traditional manufacturing.

Have you ever wanted to make a beer glass out of beer? Me neither!

But now you can!

Materials such as sand, chocolate, beer are used in additive manufacturing and 3D printing.

Never before have manufacturers had the selection of exotic materials available now.

This allows for greater design creativity and this coupled with the inherent iterative nature of the process is redefining the borders of creativity, making for a more aggressive design mentality, because if you can think it you can probably design and make it, affordably.

Although additive manufacturing materials are still limited, the ability to manufacture with varied materials lends an important dimension to the process.

Ceramics, bio-material, wood polymer, metal-polymer, and others have been developed for additive manufacturing freeing manufacturers to design in new ways

“I want it, and I want it now!” may have given birth to 3D printing but for large scale mass manufacturing where many thousands of parts are needed 3D printing is usually not the answer.

Because 3D printing makes one part at a time it has been considered unsuitable for mass manufacturing. It is a discontinuous production process, meaning that only one part is made at a time.

Also, it is a process that requires the post-processing of parts, and so additional time is added to manufacturing.

Business has shied away from embracing 3D Printing for mass production.

However, According to 3Dprinting.com, “Align Technology Inc., the company behind the Invisalign range of clear-aligner orthodontics… has already earned $660 million in the first two quarters (of 2017), the majority of which comes from clear aligners, and rest from their iTero 3D Scanning system. Align has made a significant impact by combining 3D printing with dentistry…

The customized orthodontics are produced within Align’s vast factory of 3D printers.” Apparently, Align has 60 such printers.

Even though Additive Manufacturing has made great strides to bring new and better materials to its manufacturing process commonly used materials like resin, powder, or filament have some limitations such as lowered mechanical strength.

Depending on the industry, the strength required for a part to work as designed might require high-grade materials with structural strength.

When an object is built up in layers, as it is in 3D Printing, an inherent weakness is at the interface of each layer.

This puts additive manufacturing at a disadvantage compared to parts manufactured using traditional means, such as injection molding or tooling.

Another inherent disadvantage of building an object through layering is maintaining a high resolution. Attaining a high resolution in additive manufacturing can be expensive but printers like the Stratasys J750 deliver unrivaled aesthetic performance including true, full-color capability with texture mapping and color gradients.

This allows the print of a prototype that looks, feels and operates like a finished products.

Application of Additive Manufacturing in Industries

Industries have taken advantage of the many benefits of additive manufacturing. The ability to easily create many small custom parts lends itself usefully for prototyping and developing new ideas and products.

Let’s take a look at how some of the major industries are applying additive manufacturing.

3D scanners have also opened up the medical industry for allowing medical professionals to scan 3D objects and 3D print them for various applications such as education and exam preparation.

This industry has taken additive manufacturing to an all new level, recently developing organs with bio materials.

Everyday, individuals are making research progress in leaps and bounds.

The aerospace industry was one of the first industries to embrace additive manufacturing, using custom-designed parts to enhance designs and efficiency.

The ability to 3D print high strength materials has also been a great benefit to this industry as this is a sector where simple parts can come at a high cost for a single component, problem solved this issue as  3D printed single parts save thousands of dollars.

Even the space station is using additive manufacturing to develop custom parts when needed. The space station can receive digital files instantly instead of physical parts flown up by a rocket. This allows the space station to save weight, space, and money while astronauts print handy tools.

Whether it is through enabling a homeowner to vacuum the house or walk around a mall in comfortable sneakers, this industry relies on its ability to develop and produce many new products quickly to meet consumer demand.

To decrease the time to market, product designers are iterating in additive manufacturing as they rapidly prototype new product ideas.

Designers test new concepts quickly and efficiently and some businesses have taken this process to the next step as they manufacture final products to market.

The joint venture between Carbon3D and Adidas represented a breakthrough in athletic footwear in exactly this way, as they manufacture final product to market with 3D printing.

Carbon’s Digital Light Synthesis technology was used to develop the first mass production process for previously impossible midsole geometries by using revolutionary 3D printable materials and paving the way for custom, high-performance shoes that meet the unique needs of each customer, according to their website.

As additive manufacturing continues to thrive and fill the gap for engineers, designers, and even doctors in product development, we will see other such partnerships. 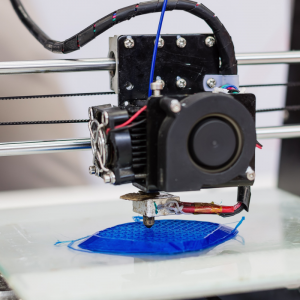 A 3D printer builds up layers

Additive manufacturing and 3D printing have carved their place in the market by allowing users to make quick, single-use prototyped parts or even mass manufactured products like orthodontics.

Multi-use applications are pushing the design envelope across every business sector, unleashing entrepreneurs and expanding the capacity of established businesses.

This greater design flexibility, because of rapid iteration, not only represents an opening for more innovative products and inventions, it also offers the potential for onshoring of production that left for cheaper economies may also represent yet another future bright spot for employment and manufacturing here in the United States.